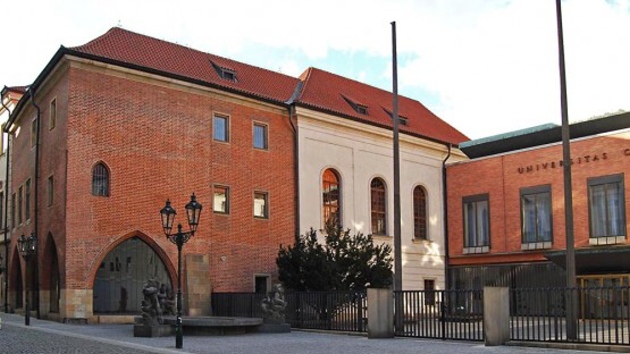 The Carolinum is located at the Fruit Market in the Old Town. The Estates Theatre is nearby.

When Charles IV founded the university on 7 July 1348 as the first in the Czech kingdom, the university had no central building. The students lived with their professors and also ate with them. Lectures were held either in private or in churches and monasteries. University colleges were created only later, one of which was the Carolinum.

The Charles College was founded in 1366 and in 1386 was housed in the Gothic patrician house of Johlin Rotlev, royal mint master, who donated his house to King Wenceslas IV. The King donated this and the neighbouring houses to the Charles College, which at that time was housed in an inadequate building on the outskirts of the Jewish quarter.

The new building also contained the university chapel and a large hall called Aula Magna, which was used for festive gatherings. The existing buildings were gradually rebuilt and expanded. There were also auditoriums, masters' apartments, baths, and even a prison. In 1611 all of the colleges were unified and relocated to the building of the Carolinum.

Today's appearance of the Carolinum is due primarily to the Baroque reconstruction in the 18th century, conducted by František Maxmilián Kaňka. Today we can also find here many Gothic elements that were later uncovered. For example, from the original Rotlev House is preserved the arcade and a beautiful Gothic bay from the 14th century. Its only equal is perhaps the oriel of Old Town Hall.

Extensive reconstruction of the Carolinum was carried out after the Second World War and involved not only the historic buildings of the Carolinum, but also 17 other connected houses. For example, the Buquoy Palace and Opitz house or the building known as Stokhaus. The courtyard was later adapted in the original Gothic style with brick arcades and galleries. There is a newly added statue of Jan Hus by Karel Lidický.

In the 1960s a new entrance building was built, a modified court of honour, which received a new fountain.

The main area of the Carolinum remains to this day the Great Auditorium, where festive gatherings are held as well as graduation ceremonies. The auditorium, which was in more recent modern history extended, has a corrugated ceiling, giving it excellent acoustics.

The chandeliers hide heaters and loudspeakers. A tapestry by Vladimír Sychra from 1947 hangs on the main wall, depicting Charles IV kneeling in front of Prince Wenceslas. The seal of the university bears the same motif. The auditorium is adorned with a larger-than-life bronze statue of Charles IV.

Above the choir there is a small Gothic portal that leads to several chambers, one of which contains valuable papers, seals and insignia – the sovereign university emblems. On the other side of the auditorium there is a small chapel. The Carolinum is a national monument.

The building of the Carolinum witnessed many important events and is visited by many important personalities. For example, Jan Hus worked here as a professor and rector, and spoke in the auditorium of the Carolinum against the papal sale of indulgences. The university masters were also involved in the publication of the Four Articles of Prague in 1420 (the Hussite reform demands).

The Carolinum also several times held the state diet and in 1618, after meeting in the Carolinum, the Czech reformers went to the Prague Castle, where they defenestrated the governors Slavaty and Martinice.

It can be said that the university became one of the centres of the reform movement. Unfortunately for the university, after the defeat of the reform army at the Battle of White Mountain, the university was heavily punished. The victorious Ferdinand II handed it over to the Jesuits, who merged its colleges with the Clementinum.