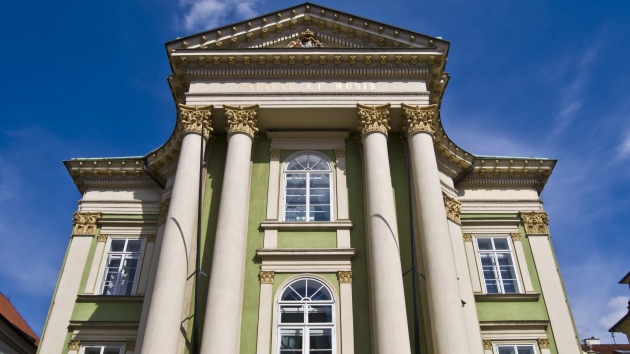 The building of the Estates Theatre is located in the Old Town near the seat of Charles University. It was commissioned by the enlightened Count František Antonín Nostic-Rieneck, patriot and Prague resident of German extraction. He used his own land and requested permission from Emperor Joseph II, who supported him even against the protests of the owners of neighbouring houses, Charles University and the city, which owned the Kotzentheater and was wary of competition.

The construction lasted less than two years, from the setting of the foundation stone on 7 June 1781 to the grand opening on 21 April 1783. It is worth noting that in carrying out the excavations for the foundations of the building a small jar with silver coins was found, which was certainly considered a good sign. The building was built in the classical style by architect Antonin Haffenecker and is one of the few such buildings to have been preserved almost in its original state.

Although the theatre staged mostly German drama and opera, Czech plays were also occasionally performed, such as the first Czech performance Odběhlec z lásky synovské in 1785. A little later, it was the site of the original Czech performances of Břetislav and Jitka by Václav Thám.

In 1920 Czech theatre professionals forcibly occupied the Estates Theatre. The president of the new republic, T.G. Masaryk, disagreed with this move and never set foot in the theatre again in protest. That same year, the Estates Theatre also officially became part of the National Theatre. After a break during the occupation it again used the name Estates Theatre from 1920.

The author of the original interior decoration was Jan Jakub Quirin Jahn and the author of the curtain in 1804 was Josef Bergler. The last general reconstruction took place between 1983 – 1991, during which the entire structure was reinforced and paintings restored. During the reconstruction it was recommended to not change the materials used in order to avoid ruining the otherwise excellent acoustics. The original gas chandelier was replaced by electrified copies. Thanks to the reconstruction the theatre today has 664 seats and 40 standing places.

Mozart has played a major role in the history of the theatre. In 1787 he conducted The Marriage of Figaro here and on 29 October 1787 the world premiere of Don Giovanni was staged here, which Mozart dedicated to the citizens of Prague. Mozart's operas were also presented in the years to come.

In 1828 famous violin virtuoso Paganini performed at the theatre six times. The Estates Theatre was in 1834 the site of the premiere of Fidlovačka by J. K. Tyl, in which the audience first heard the song Where is my Home? by František Škroup. Thanks to its popularity it was later chosen as the national anthem.