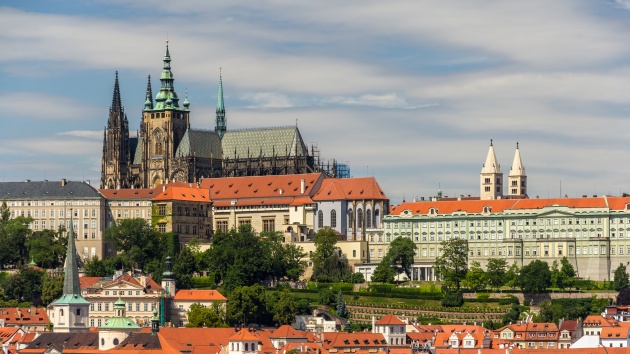 Prague Castle can without exaggeration be called the most important historical and cultural monument in the Czech Republic. The history of the establishment of the Prague Castle dates back to the end of the 9th century, when Prince Bořivoj of the Přemyslid family built a fortress here. The first stone structure from that era is the Church of Our Lady, whose foundations can be found between the second courtyard and the garden on the Bastion.

The more than thousand-year history of the Prague Castle is closely interwoven with the history of the Czech lands and all of Europe. Undoubtedly the most significant ruler who resided here was Charles IV in the 14th century. He ordered a magnificent reconstruction of the neglected castle, especially the royal palace.

The shape and life of the Prague Castle was also significantly written by the Habsburg ruler Rudolf II. He not only brought his court to the Prague Castle, but also because of his great fondness for the natural sciences and the arts was surrounded by prominent scientists and artists, but also swindlers and charlatans. In any event, the time of the reign of Rudolf II brought great prosperity to the castle and its collections. Prague Castle twice became the seat of the Holy Roman Emperor.

Since the establishment of the Czechoslovak Republic in 1918, Prague Castle has been the seat of the president, and has remained so to this day.

The most important structures in the castle grounds are certainly the Theresian Palace, the Old Royal Palace, the Louis Wing, Queen Anne's Summer Palace, the Prague Castle Riding School, the Old Provost, the New Provost, the Supreme Burgrave, the Rosenberg Palace, as well as religious monuments, such as the St Vitus, Wenceslaus and Adalbert Cathedral, the Basilica of St George, the Monastery of St. George, the All Saints Chapel and the Chapel of the Holy Cross. Also popular are the castle towers, such as the Mihulka, Daliborka and the White Tower.

Currently, the Prague Castle complex comprises several public squares, such as the three castle courtyards, the St. George Square, as well as streets like Vikářská Street, Jiřská Street, the Golden Lane or U Prašného mostu (At the Powder Bridge). There are also gardens, which include the Royal Garden, the Terrace Garden of the Prague Castle Riding School, the Lumbe Garden, the Stag Moat Garden on the Bastion, the Garden of Eden, the Hartig Garden, the Garden on the Ramparts and the Opyš Garden. The Prague Castle also consists of the castle ramparts, the Old Castle Steps and the New Castle Steps.

Today, Prague Castle is visited by many visitors each year who admire its grandeur, architecture and history. It hosts temporary as well as permanent exhibitions, such as the National Gallery in the Convent of St George. Prague Castle also conceals a wealth of artistic monuments, such as the crown jewels stored in the Cathedral of St Vitus.

At Prague Castle visitors can also watch the ceremonial changing of the guard with fanfares and exchange of standards in the first courtyard every day at noon.

Prague Castle is listed in the Guinness Book of World Records as the largest historic castle complex in the Czech Republic but also worldwide. Every year it attracts some 1.5 million visitors, making it the most visited site in the country.