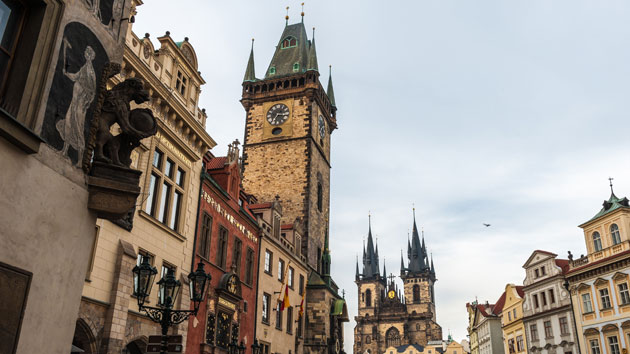 The Old Town Hall is located in the Old Town Square and since 1338, with the consent of King John of Luxembourg, was the centre of the government of the Old Town of Prague.

Throughout its long existence the town hall was the scene of many important events. In 1458 Czech nobles elected Czech King George of Podebrady here. After the Battle of White Mountain, it became a prison to hold the participants of the anti-Habsburg revolt, 27 of whom were executed in 1621 in the square in front of the town hall. Today the place is marked with 27 crosses in the pavement. After the merger of the four cities of Prague in 1784 it housed a single official city administration and the town hall underwent many modifications.

The last days of the German occupation in 1945 left their mark on the town hall. It housed the Czech National Council and the town hall was shelled and set on fire. The eastern and northern wings were completely destroyed, and the astronomical clock tower and chapel were also damaged. Later the damaged part of the town hall was repaired and preserved. Several times afterwards a tender to complete the town hall was announced but never implemented.

From an architectural perspective, the hall consists of a block of original merchant houses of different ages, which were gradually connected. All styles have been inscribed into the town hall. The Romanesque foundation has been preserved in the vaults, on which a Gothic building was built that survived in both exteriors and interiors.

The central building of the town hall is the Gothic house of Wolflin of Kámen from the late 13th century, with a richly decorated Gothic portal. It adjoins a large prismatic tower with a height of 69.5 m dating from 1364, in which was later placed the famous astronomical clock. Today the tower offers a beautiful view and is accessible via a modern elevator and barrier-free ramp in the body of the tower. It also contains a chapel with a richly decorated five-sided oriel from 1381.

The outer side of the oriel is decorated with copies of important Gothic sculptures called the Old Town Madonnas. The oriel itself, thanks to its rich decoration, is one of the most beautiful Gothic monuments of the second half of the 14th century in the Czech Republic.

Another so-called Western House decorated with a beautiful Renaissance trilogy window with the inscription Praga caput regni. Outside the window there is a wedding hall, where weddings have been held at the town hall since 1871. Another house has a neo-Renaissance facade and two high windows in a large boardroom.

There is also the corner U kohouta house and the Minute House with arcades, which protrudes from the Town Hall. It was originally Gothic, later Renaissance style and decorated with figural sgraffito that was found under the late Baroque plaster.

The most valuable monument of the town hall is the aldermen's hall from the second half of the 15th century. This central place is entered via a Renaissance marble portal in which the Renaissance beamed ceiling with paintings from the second half of the 16th century has been preserved. The High Gothic is here represented by a valuable sculpture of the suffering Christ. The portals above the doors are filled with municipal emblems and the wooden panelling of the walls is adorned with 46 guild and 12 municipal coats of arms.

The second floor also contains the Jiříkova and Brožíkova halls. The Jiříkova hall is named after the bust of King George of Podebrady. The Brožíkova Hall serves as a meeting hall and is named after the author of two large paintings, Václav Brožík, named Master John Hus before the Council of Constance and the election of George of Podebrady as Czech king. The model for Hus's face and other prominent figures were important contemporaries of Brožík.

The entrance hall with its Gothic vault was decorated with paintings by Mikoláš Aleš from the year 1909.

The Old Town Hall is a national cultural monument.

In the hall we find preserved the Romanesque-Gothic underground, which uniquely illustrates the development of the Old Town of Prague. Originally, the level of the square and surrounding streets was a few metres lower than today.

The city was forced to artificially increase the terrain with landfills due to frequent flooding. Thus the original ground floor of the house became the basement. The oldest part of the basement is the Romanesque hall from the second half of the 12th century. In the basement there are wells and cisterns as well as a former prison. Some of the names of prisoners can be found carved on one of the Gothic portals.