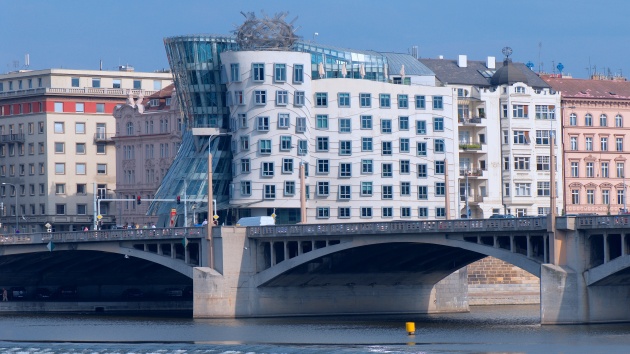 Jirásek Bridge is the sixth bridge over the Vltava River in Prague. It was constructed because the connection by Palacký Bridge was no longer sufficient to the emerging industrial Smíchov.

Thus, from 1933 in the next 4 years there grew a long reinforced concrete bridge 310 meters in length and 21 meters in width. Its designers were an engineer František Mencl and architect Vlastimil Hofman. The commissioning took place in two stages. During the first stage the tram transport was set off along its central part and two years later was the rest of the bridge was put in operation. The rails were later removed.

The bridge over the river spans 5 concrete pillars and 6 parabolic arcs. Prior to the artistic aspect of the bridge was its functionality, so the artistic decor is austere. The surface is made ​​of plaster of artificial stone, the bridge has a concrete railing and lighting poles have glazed patio surface. On both bridgeheads there stand pylons and obelisks with decorative fountains.

Bridge got its name after the famous Czech writer and playwright, Alois Jirásek who lived between the years 1903 - 1930 at the foot of the bridge in the house number 1775 on today’s Jiráskovo Square.