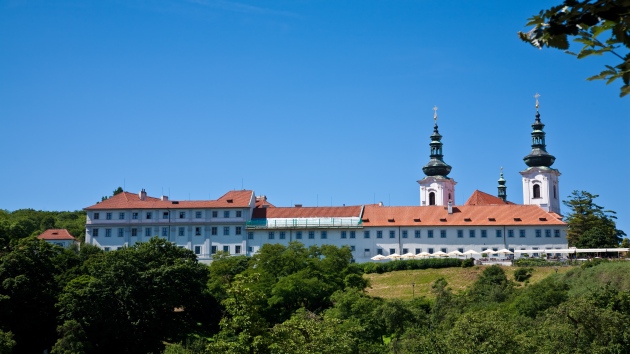 The Strahov Monastery, or the Premonstratensian abbey at Strahov, is located in the Hradčany district very close to the Petřín Gardens and Prague Castle.

The monastery was at the time of its inception the largest Romanesque building in Bohemia and probably was even bigger than the former Prague Castle. However, this Romanesque building caught fire and the restoration was carried out in the style of early Gothic. The monastery also suffered during the Hussite wars, although a new heyday came at the turn of the 16th and 17th centuries. At that time the Gothic-Renaissance Church of St Roch was built, dedicated to this protector against the plague. Today it is deconsecrated and contains a Miro gallery.

The culmination of the revivals of the convent cathedral, the three-aisled basilica of the Assumption of the Virgin Mary and the monastery was the transfer of the relics of St Norbert from Magdeburg from the Premonstratensian monastery here to Strahov. Today his grave can be found in the chapel of St. Ursula. In 1648 the monastery, like many other sites, was looted by the Swedes.

After the Thirty Years' War the early Baroque monastery underwent a restoration, which involved renowned foreign and Czech artists.

The architects were Giovani Domenico Orsi, Jean Baptiste Mathey, Kilián Ignác Dientzenhofer and Anselmo Lurago. The latter is the author of the reconstruction, which brought the monastery into its present form. One of the most important monuments of this period is the Theological Hall, the ceremonial room of the Strahov Library. It contains old manuscripts and incunabula kept in Baroque cabinets and even the oldest parchment gospel from the 9th century.

The convent also was reconstructed and a new library was built in the classicist style with a big Philosophical Hall. The Baroque interior of the church is decorated with frescoes and mural paintings from the life of St. Norbert. Also noteworthy is the Strahov brewery, which brewed beer until the early 20th century. In the 19th century the Strahov Gallery was built to house Central European artworks.

The monastery also has gardens with sala terrena and a panoramic terrace with a Baroque gazebo, which is worth visiting for its beautiful views of Prague.

The Strahov complex also houses a small part of the Museum of Czech Literature, i.e. its literary archive. The whole Strahov Monastery is a national cultural monument. The Church of the Assumption, like the Basilica of St Margaret in Břevnov, was commissioned in 1992 by Pope John Paul II as a Basilica Minor, the marking of the largest Catholic churches.

The founders of the monastery, Prince Vladislav II and Bishop Jindřich Zdík, are buried in the cathedral at an undisclosed location. Conversely, General Gottfried of Pappenheim, who died in 1632 after the Battle of Lützen, is buried in a famous place, i.e. the chapel of Our Lady of Passau, and is the origin of a well-known Czech adage ("známe své pappenheimské").