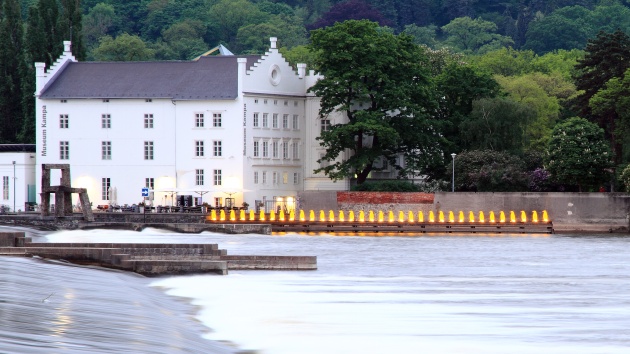 Sova's Mills cannot be overlooked. The building located on the Kampa Island, shines in its whiteness at the left bank of the Vltava. The first mention about the mills fates back to 1393, but they used to be here much earlier. The mills have their present name after the owner, Václav Sova of Liboslav. It was he, who built here a Gothic house and mills, hammer mill with the grinding mill, sawmill, furnace, and the cloth and tawing washboard and many more.

During the Renaissance period some new adjustments of the mills occurred and later, in 1850, at the time of the businessman František Odkolek. He had the mill rebuilt into a steam mill and its large chimney marred the panorama of the Prague Castle.

The reconstruction of the building  for this collection, which started in 2000, involved an affair, one that divided public opinion and that of the experts. One of the conditions of the donation of the collection was placement of an imaginative artifact glass cube in a metal frame on the roof of the building. not Not only part of the public, but also conservationists protested against this unusual element, changing panorama of the Prague Castle. Ministry of Culture finally authorized the installation, so you can see it today.

The museum also had its new visual symbol – the four meter high wooden chair, which weighed 2 tons. However, it was taken by the flood in 2002. The chair was then replaced by a new six meter one made of poplar wood, which was removed in 2012 due to the disruption of the wood structure.