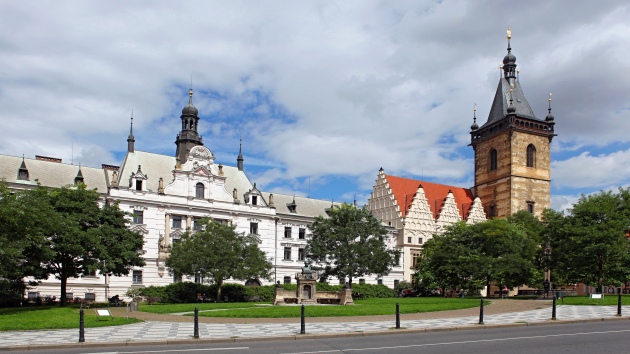 The New Town Hall is located on Charles Square in the New Town. Construction on the Town Hall began soon after the founding of Prague's New Town by Charles IV in 1348. It functioned as the seat of government of the New Town of Prague until 1784, when all of four cities merged and administration was relocated to the Old Town Hall.

In 1419, the New Town Hall became the site of the First Defenestration of Prague. A crowd of followers led by Jan Želivský threw the mayor, two aldermen and several townspeople out the windows, who fell on spears and lances held by the crowd below. This event began the Hussite revolution. In 1609, the Bohemian Estates met at the New Town Hall to persuade Emperor Rudolf II to issue an imperial charter of religious freedom. After 1784 the New Town Hall housed the Provincial Criminal Court.

In addition, the original town hall was extended by a prison, aptly called the Prague Bastille. Here were jailed, for example, Jan Sladký Kozina, the leader of the Chod uprising, participants in the revolution of 1848, and also trial was carried out here with the participants of the Omladina movement.

The Town Hall is made up of several originally medieval houses of various ages. The oldest building in the direction of Vodičkova Street dates from 1377, the wing toward Charles Square then between the years 1411 to 1416. The older part was rebuilt in the Renaissance style by Bonifáce Wohlmut after 1559. Inside is the original large Gothic hall, Mázhaus, with cross-ribbed vaults. This is the highest vault in a non-church space.

The largest and most important rebuilding of the New Town Hall took place in the early 20th century under the leadership of Antonín Wiehl and Kamil Hilbert in the spirit of cleansing the buildings from later styles and returning it to the Renaissance style from the first half of the 16th century. The largest room of the Town Hall is the Alderman Hall, where five aldermen alternately sat in session.

The corner Gothic tower dates from the second half of the 14th century. It has later Renaissance windows and the walkway tower and roof date from the 18th century. The tower is 42 m high with 221 stairs leading up to it. It is open to the public. Inside the tower there is a Gothic, later Baroque style chapel.

The New Town Hall contains exhibition and concert halls, and social events and weddings are held here. The last renovation took place from 1976 to 1996 and it has been a national monument since 1962.

A painted clock was placed in the tower in 1668, but it was removed in the late 18th century. In the corner you can find the "Prague elbow" (59.14 cm), which was used for public re-measurement.