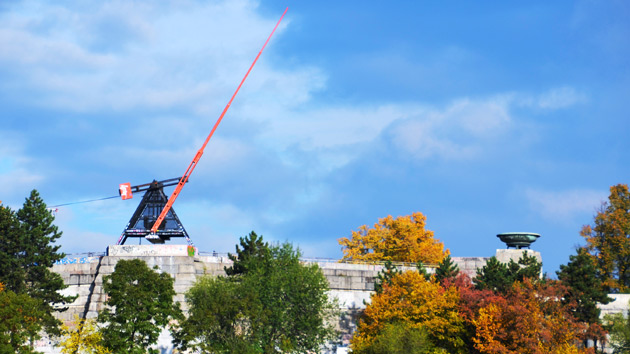 On the left bank of the Vltava River in Letná gardens the so-called Time Machine is located, commonly nicknamed the Metronome by the locals.

During the socialist era on its sight stood a megalomaniacal and certainly unpopular monument of the dictator Stalin, which earned a derisive nickname "queue for meat". In 1962 the monument was demolished for 4.5 million CZK.

In 1991 an imaginative art object was put on the place by a sculptor and professor of the Academy of Arts, Vratislav Karel Novak, called the Time Machine. It measures almost 25 meters in hight and weighs 7 tons. The pendulum was transported and placed on the sight with the help of a helicopter because there was a big concern of damaging the statics after shooting down the Stalin monument. To many observers, it still remains a mystery, according to which rules the metronome sometimes works and sometimes not.

It got its nickname Metronome quite rightly, as it strikingly resembles Mälzels metronome with a reversible pendulum. However, the mechanical design is completely different.