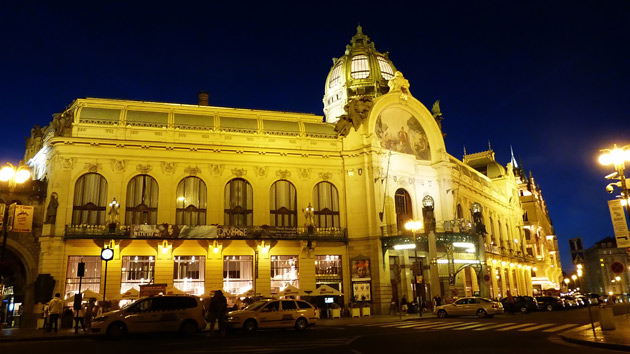 The Municipal House is located in Old Town on the site where the King's Court, the seat of the royal city, stood since 1383. The construction of the Municipal House was initiated by the Prague Town Hall and the City Council, as a centre of Czech cultural life and the counterpart of the German House and casino and the German promenade of Na Příkopě.

The authors of the building, which was built in the years 1905  – 1911, were the architects Antonín Balšánek and Osvald Polívka. Officially, the building was handed over for use in November 1912. It became not only a centre of social life, but also a place of important political events. The Czechoslovak Republic was proclaimed from the balcony in front of the Primátorský hall on 28 October 1918. In the 1920s and 30s, balls, festivals and exhibitions took place here and the Municipal House experienced its greatest glory. In November 1989, the first meeting between Václav Havel and the chairman of the former communist government was held here.

The external appearance of the Municipal House reflects the historicist style typical of the end of the 19th century. We can find a mix of neo-Renaissance and neo-Baroque, but the Municipal House is most often held up as an example of Prague Art Nouveau. The Municipal House was a demonstration of the growing confidence of the nation, attested by the spectacular decoration by the most significant artists.

There are approximately 1,240 rooms in the building, consisting of not only theatres and exhibition spaces, but also four restaurants – French, Pilsner style, a café and an American bar.

The Municipal House was at the time of its inception an ultramodern structure with unprecedented technological facilities. There were 28 electric and hydraulic lifts installed, a central vacuum cleaner, modern telephone exchange, air conditioning with remote control, pneumatic post, an ice maker, the most modern kitchens, and one of the largest electro-pneumatic organs. Linoleum was for the first time used on a large scale, like a cry of progress.